In Honor of the Publisher Jakob Hegner on his 70th Birthday 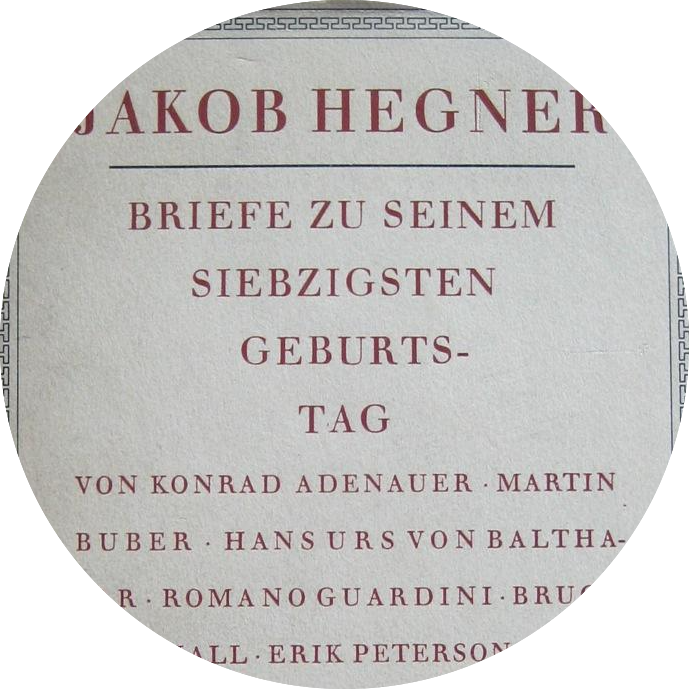 My own efforts to bring an unadulterated Christianity into the very heart of the secular world have got me thinking about your work as a “publisher at the threshold” (you yourself could have called your house “Editions du Seuil”) and about the ethos that should animate it. All the Christian questions of our time⁠—⁠in fact, all contemporary questions⁠—⁠suddenly flock around me demanding answers: How can the Christian mediate between Christianity and the world without thinking of the former as a part, even if an important part, of the latter, or setting himself up as a judge who arbitrates between them from some supposedly central position? Obviously, the Christian is called to take the inner heart of the faith out into the world and to present it in a form non-believers can understand. Equally obviously, he’s called to mediate in the other direction by bringing the outside world towards the ecclesial center so as to rouse those on the inside from their slumber. What’s not so easy is to be acknowledged as an equal, or perhaps as a leader, by people outside the Church: Even if you manage to do so without false compromise, how do you avoid the mistrust and envy of the ecclesial insiders? Hölderlin told his fellow writers that poets⁠—⁠especially the spiritual ones⁠—⁠must be worldly. Publishers can have no other motto. There’s a paradox here that will remain authentically alive, a genuine salt of the earth, so long as both⁠—⁠writer and publisher⁠—⁠stay cognizant of their own origin and well-spring, which lies in the spiritual domain. It’s by the energy of spirit that they have to be worldly, and it’s out of the superabundance of divine contemplation that, as the ancients liked to say, their outward actions are to flow. Still, they shouldn’t shrink from “getting their hands dirty,” or stop short in panic for fear of having strayed too far from the source on their way to the lost. Finally, they need to bring together spiritual and worldly divination: I mean the discernment of spirits proper to the Christian, and then a flair, a nose, an afflatus. Note: They have to bring them together, not confuse them or put one in place of the other. Grace seeks union with a natural gift, and an individual meant to be the locus of this delicate encounter as an author or publisher, an individual personally selected for this destiny, needs to make sure that standing he doesn’t fall. The natural gift is a talent he’s received as a loan to earn interest on. Unlike a talent you can put in the bank or bury in the ground, grace has to be prayed for, with one’s whole life, every day anew. And yet the two things are so united in the destiny of the publisher that neglect of the second would inevitably damage the first. Happily, we can congratulate one another as Christians on the beauty of the task and on our God-given successes in it, and, as we look back in celebration, we can say our work was not quite in vain. In the joyful light of this retrospective gaze, our heart becomes easy, and we feel ready to give everything over to God⁠—⁠including the judgment that will discern between the wheat and the chaff. Returning the gift, free of any attachment, may be the best act of our lives. “The good will predominate in the whole.” So it seemed to Goethe. Why shouldn’t it seem so to us, who have the privilege of being able to lay our life’s work in the hands of God’s all-transforming grace? It’s into these hands that I commend you today.